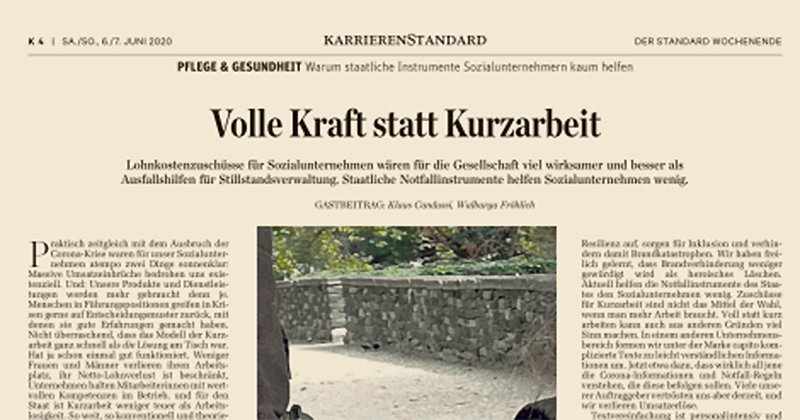 "Full steam ahead instead of short-time work"

In a guest contribution for "Der Standard" Walburga Fröhlich and Klaus Candussi argue for wage cost subsidies for social enterprises instead of short-time work. 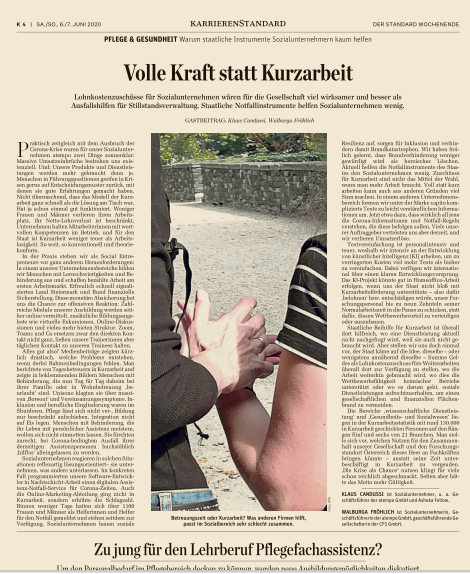 Full power instead of short-time work

Practically at the same time as the Corona crisis broke out, two things were as clear as day for our social enterprise: Massive slumps in sales threatened our very existence. And: Our products and services are needed more than ever. In times of crisis, people in management positions like to fall back on decision-making patterns with which they have had good experiences. Not surprisingly, the model of short-time work was quickly seen as the solution at the table. It has already worked well once. Fewer women and men lose their jobs, their net wage loss is limited, companies keep employees with valuable skills in the company, and for the state, short-time work is less expensive than unemployment. So far, so conventional and in line with theory.

In practice, we as social entrepreneurs face completely different challenges: In one of our divisions, we train people with learning difficulties and disabilities and create paid work in the primary labor market. The federal state of Styria and the federal government were quick to signal financial security. This monetary security gave us the chance to react proactively: Since then, numerous modules of our training have been taught online, and additional educational opportunities such as virtual excursions, online discussions and much more provide structure. Although zoom, teams and co. do not completely replace direct contact, they did allow our trainers to maintain daily contact with our trainees.

So everything is good? Media reports recently showed drastically what problems arise when such framework conditions are lacking. There were reports of daycare workers on short time and oppressive pictures of disabled people who are now 'on leave' from their families or residential care homes every day. In unison they complained about massive 'boreout' and symptoms of loneliness. Inclusion and professional integration were in a state of shutdown. Care cannot be postponed, education can only be postponed to a limited extent, integration cannot be put on hold. People with disabilities who master their lives with personal assistance do not want to be mothballed. They are rightly afraid of being left literally 'helpless' alone when their current assistants fail due to corona.

In such situations, social enterprises reflexively react in a solution-oriented manner - they do what others fail to do. In this specific case, our software developers programmed a digital assistance emergency service for corona times in night-shift work. The online marketing department did not go on short-time work either, but instead increased the blow. Within a few days, over 1100 men and women had signed up as assistants for the emergency and have been available ever since. Social enterprises build up social resilience, ensure inclusion and thus prevent fire disasters. Of course, we have learned that fire prevention is less appreciated than heroic fire fighting.  Currently, the emergency instruments of the state do little to help social enterprises. Subsidies for short-time work are not the means of choice when more work is needed. Working full instead of short time can make a lot of sense for other reasons. In another division of the company, we are transforming complicated texts into easily understandable information under the capito brand. Now, for example, we make sure that everyone who needs to follow the corona information and emergency rules really does understand them. However, many of our clients are currently putting us off, and we are losing revenue.

Text simplification is personnel-intensive and expensive, which is why we are working intensively on the development of artificial intelligence (AI) to simplify many more texts than before at reduced costs. We have a clear development lead internationally. The AI project could easily be carried out in the home office, if the government would not just support us with short-time work - i.e. 'reward' or compensate us for sending our research staff up to nine tenths of their normal working hours during breaks, instead of defending or expanding this competitive advantage.

State aid for short-time work is helpful wherever a service is not currently in demand because it is not needed. But let's imagine that the state were to come up with the idea of providing the same - or at least approximately the same - sum of money as a wage subsidy for continued work wherever the work is still needed, where this supports the competitiveness of domestic companies or where it is a matter of maintaining social services in order to avoid a social and financial conflagration.

The areas of 'scientific services' and 'health and social services' are ranked fifth and sixth out of 21 sectors in the short-time work statistics with around 130,000 people sent on short-time work. Imagine the benefits that this army of skilled workers could bring to the cohesion of our society and to Austria as a research location - instead of wasting its time on short-time work when underemployed. Using the 'crisis as an opportunity' sounds rather tasteless to many. But rarely would the motto have more validity.